September 29, 2021 By fpeinfo@fpeautomation.com No comments yet

Congratulations to FPE Automation’s Chad Patkus – Winner of the MAC Valves Distributor of the Month Award!

It was announced today that Chad Patkus received a Distributor of the Month award for his work at a heavy equipment manufacturer in the transportation sector. The company was using outdated technology and having reliability issues as a result.
Their top priority was reliability. Ideally, they also wanted a 12VDC valve that could run off a vehicle’s 12-volt electrical system. Ultimately, they got both.
At this point, Chad, FPE Automation’s Scott Massie (Sales Manager & FPE In-house MAC Valves Specialist) and Joe Richardson (VP Sales, MAC Valves) set up a virtual meeting with the customer to present the Bullet Valve® in a custom manifold. 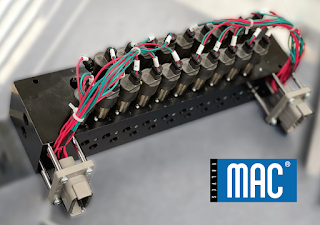 The team presented the advantages and reliability of the Bullet Valve using animation and showed several configurations of custom Bullet Valve manifolds. Ultimately, the customer decided upon a custom manifold complete with a wiring harness that would connect using Deutsch connectors that are preferred for mobile applications. There appeared to be some clear advantages, but field performance would be the true test.

After months of testing the performance of the valves in the field, the customer was eager to move forward with the MAC Bullet Valve manifolds on their production equipment.
Top executives at MAC Valves review application reports, and carefully choose award recipients, based on designs that work. The Bullet Valve manifolds exceeded the customer’s requirements for reliability, came in a slim design, and were plug and play with 12-volt mobile compatibility.
Reliability issues present more problems than just downtime. They’re costlier than ever with global supply chain delays. If your current technology is giving you headaches, reach out to FPE Automation. We may be able to significantly improve your processes using MAC Valves‘ patented technology.