HomeLatest News What Does It Mean to be a Universal Robots Platinum Partner?

What Does It Mean to be a Universal Robots Platinum Partner?

October 26, 2021 By fpeinfo@fpeautomation.com No comments yet

You may have heard the news. Earlier this year, it was announced that FPE Automation had achieved the coveted platinum distributor status with Universal Robots.

Universal Robots is the world’s leading manufacturer of collaborative robots, or “cobots”, as they are called. They also have one of the most extensive ecosystems of compatible/partner products, called UR+, which is unparalleled in the industry. Cobots have evolved to include reliable sanding, welding, palletizing, machine tending, bin picking and so much more. 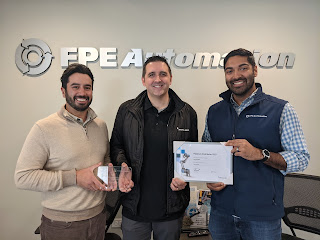 In addition to the award plaques, we were honored to receive this letter from top Universal Robots executives.

I had the opportunity to see Bryan Bird, Regional Sales Director US and Canada, Universal Robots earlier this month in person, at the Pack Expo trade show, where he offered his congratulations.
He had this to add.

“FPE Automation has been an incredible success story in 2021, driving growth of flexible automation in the Midwest US during a period of severe labor shortage.

Their recent achievement of Platinum partnership status with Universal Robots reflects their commitment to helping their customers optimize manufacturing operations through deployment of collaborative robots.”

So, what does it mean to be a Platinum Distributor?
No matter who you ask, it is truly an honor. Let’s take a look at what it means from a few different perspectives.

Universal Robots considers us “part of an exclusive group of partners worldwide that are awarded this recognition.”
FPE Automation‘s CEO, David Bardos, had this to say. “This is a very elite club and we would like to thank our customers, employees, and all at Universal Robots. Universal Robots continues to assist our customers in being more productive, profitable and leaders in their respective industries.”
FPE Automation‘s engineers, solution specialists, support staff and management look at it this way; It’s an unprecedentedly busy time. Companies in our region are reaching out to us due to the labor shortages that Bryan Bird mentioned above. They’re striving to remain competitive. They face new challenges, and often, carefully planned & engineered process improvements are their lifeline, not only for their survival, but to thrive.
Our team helps people. One application at a time. That happens to dovetail very nicely with the world-class products Universal Robots provides. Collaborative robots work safely alongside humans to perform work that is often monotonous or unsafe. Because they are so effective, so quick to deploy, have fast ROI, and are so easy to use, they’re often a key component to growing and maintaining a successful business. A superior product and a dedicated team are a must. However, an achievement like this would not be possible unless business owners everywhere were in agreement – Universal Robots is an operational game-changer!
FPE Automation has achieved Universal Robots Platinum Distributor status thanks to you.